In the fall of 1801, the English clergyman and avid traveller Edward Daniel Clarke arrived in Eleusis. His stated goal was to visit the “mystic temple” used in antiquity for the festival of Ceres. He did not expect to find much; after all, he was aware of George Wheler’s account regarding the ruinous state of the once “beautiful superstructure”, the product of a “wonderful combination of talents”. He was therefore not disappointed when he came upon a confused heap of stones, pillars buried under the collapsed roof, and cornices discarded and neglected.

Among the ruins, Clarke found the statue of “Demeter”. It was a colossus made of white marble and the workmanship indicated a master no less competent than Praxiteles. The statue had first been described by Wheeler and there had been many attempts by European travellers to remove it, but their efforts came to nothing. The superstitions of the Eleusinians, the diplomatic intrigues of competing foreign consuls, the avarice of the Ottomans, and the absence of mechanical equipment able to address the statue’s enormous weight ensured that “Demeter” remained in place, a perennial protector of local farmers.

Clarke was determined to prevail where all others had failed. He bought the statue from the voivode of Athens; he secured a firman from Constantinople that allowed for its removal, as well as the services of an officer to enforce the order; he repaired the old quay of Eleusis; he found rope, nails, a saw, and long poles to lift the block; and procured the compliance and assistance of the local priest, who struck the first blow for the removal of the rubbish that half-enveloped the statue. Once the villagers were convinced that no harm would befall the labourers, they were able to carry “Demeter” to the sea in nine hours, as 150 men and boys from the surrounding countryside watched the Englishman carry away the protectress of their fields.

The lovers of the Fine Arts

This act of kidnapping what neither the first nor the last occasion when Europeans attempted (and often succeeded) to remove works of art from Greece. Eleusis had long captivated the minds and intellect of Europeans, as home to the preeminent Mysteries of the ancient world. It was therefore only to be expected that learned individuals and societies would undertake efforts to explore its glorious past. Clarke was only interested in removing a superb statue, but others were far more circumspect in their approach.

The Society of Dilettanti was founded in 1732 by noblemen and was aimed at those who had visited some “Classic ground”. Its members included politicians, diplomats, historians, clergymen, collectors etc. It was this group of passionate antiquarians that financed the first organized archaeological excavation in the sanctuary of Demeter in 1812. Under the supervision of Sir William Gell, a team of labourers unearthed the Greater Propylaea and the temple of Artemis Propylaea. They were also able to determine the location of the Telesterion, but the village of Eleusis was built over its remains and hindered their research.

The presence of houses (and the absence of money) proved a persistent challenge faced by all the archaeologists who came to Eleusis. The French archaeologist François Lenormant investigated the area of the Propylaea in the 1860s, but he was forced to abandon all thoughts of a systematic excavation due to the aforementioned limitations. He was able, nevertheless, to explore parts of the Sacred Way and publish many inscriptions from Eleusis.

It was another organization that was finally able to overcome all challenges and embark on the organized excavation of the ancient sanctuary. The Archaeological Society of Athens was founded in 1837; its financial situation had been precarious during the early years of its existence, but in June 1882 it was finally in a position to fund the systematic excavation of the Telesterion and the surrounding sacred precinct. The cost was enormous; the villagers demanded high prices for their cottages and bureaucratic hurdles were slow to be overcome. It took the Society three years, the assistance of the Greek state, and £8000 to expropriate and demolish the houses that covered the Telesterion; the cost for the actual excavations in the same period was only £2000!

The archaeologist Demetrios Philios dedicated ten years on the task, assisted by the German architect Wilhelm Dörpfeld; it was a time of great excitement since every new find could reveal something that would throw some light on the secrets of the Great Mysteries. Pilgrims would arrive from Athens to fill the thrill of being so near to the ancient worshippers, of seeing the same scenes, of experiencing the same fatigue and joy. Ancient Eleusis was coming to the light once more, and the whole world watched in awe.

Clarke, Edward Daniel (1803). Testimonies of different authors respecting the colossal statue of Ceres placed in the vestibule of the public library at Cambridge. Cambridge: Francis Hodson. 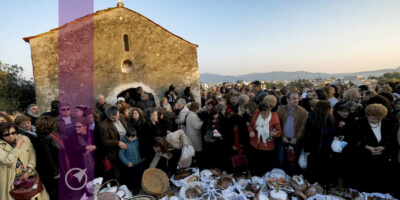